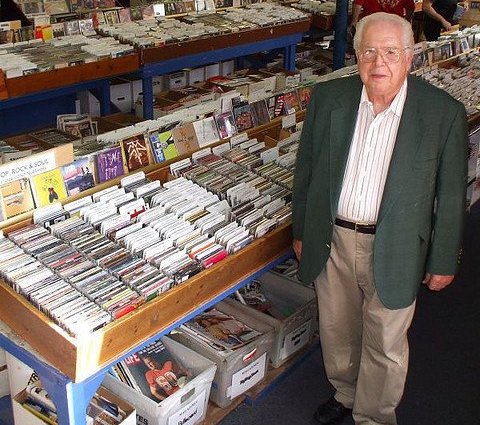 CEO Gary Walker had early success as a songwriter, penning hits for Jim Reeves, Carl Smith and Kitty Wells as well as getting cuts by a number of other Hall of Famers. He pioneered the profession of “song plugger,” working with songwriters and submitting their material for upcoming record sessions, while representing a number of out-of-town publishers. He produced several recordings by name artists and served as manager for MGM singer Sandy Posey.

Gary Walker was born October 7, 1932, and grew up a farm boy in the community of Romance, Missouri, located in the Ozark Mountain foothills. He developed an interest in music early in his life and by the time he had entered the teen years his directions in life were set; he would pursue a career as a country music singer and songwriter.

His first break came when he was a student at Southwest Missouri State College in Springfield, Missouri, when future Hall of Famer Porter Wagoner recorded their cowritten song That’s It, a lightweight novelty effort that got some radio play but attracted little attention from the record-buying public. Wagoner cut a number of other songs written by the young college student and one, Trademark, was covered by Carl Smith, whose Columbia Records single made it all the way to number two in the Billboard’s C & W charts.

While still based in Springfield, he picked up a number of other cuts including a top 10 hit by RCA’s Jim Reeves, According to My Heart. Lorrie Morgan’s father, George (also a future country music Hall of Fame member), recorded Look What Followed Me Home Tonight, and two of his songs were selected for Brenda Lee’s first sessions with Decca records. Soon after he relocated to Nashville in 1956, Kitty Wells cut Repenting (a top 10 charter) and when Decca scheduled a duet with Wells and Webb Pierce, his One Week Later was the “A” side of their first release.

Walker’s success as a songwriter helped him land a recording contract with MGM records, resulting in three single releases by the label; however, his career as a writer and singer came pretty much to a halt when he made a decision that was to have far-reaching effects on his career in music; he decided to partner with another songwriter who was attending Vanderbilt Law School, Kenny Marlowe, in the purchase of a small studio, Reavis Recordings. The enterprise was underfunded, and he was soon scrambling to keep it alive. Overwhelmed by a myriad of details necessary to keep the studio in operation, he had little or no time left for songwriting or personal appearances as an entertainer.

Excessively enamored by that phenomenon, rock ‘n roll, that was turning the world upside down, Walker turned to producing recordings targeted for that market and the studio (renamed Fidelity Recordings), became a hangout for singers and musicians that were devotees of that genre. Many of the rock hits of the time were created by independent producers scattered around the country, outside the major recording centers of New York and L.A. Marlowe turned out to be a sound genius and the team turned out a dozen or so master recordings that had enough commercial potential to be released on independent labels such as Sun, Roulette, Felsted, Apollo, East West (an Atlantic Records subsidiary), etc., and they even had one record released on Okeh, Columbia Records’ blues label. All recordings featured songs copyrighted by one of Fidelity Recordings' publishing companies, providing potential extra earnings in royalties. It was Walker's job to get some of their songs recorded.  Meanwhile, Walker was learning the nuts and bolts of the music business, including music publishing, artist management, record producing, record promotion etc. that would prove to be invaluable in his future. He also started his own label, Chart Records, which he later sold to Slim Williamson, a Georgia radio executive. Williamson built the label into a successful C & W venue where a number of future stars, including Lynn Anderson and Del Reeves, had their debut record releases.

Fidelity Recordings studio burned in 1959 and Walker found himself in need of a job to help support his family. He convinced Atlanta music publisher Bill Lowery to open a Nashville office and went to work in his new profession, that of the “song plugger.” Lowery’s roster of songwriters included Jerry Reed, Ray Stevens, Joe South, Mac Davis, and Freddy Weller. It was Walker's job to get some of their songs recorded, and he had success early in the game by coming up with a couple of cuts on Reed's songs, Misery Loves Company, a number one hit by RCA’s Porter Wagoner, and a Brenda Lee Decca top ten record on Billboard's top 100 chart, That’s All You Gotta’ Do.

A part of his responsibility as song plugger was to solicit new material from songwriters and he spent many hours reviewing new efforts by writers who dropped into his office. One of these was Kendall Hayes, who had not had any songs recorded until after he returned to his home in Danville, Kentucky. When Hayes sent a tape of his Walk On By, Walker smelled a hit, but he called to tell Hayes that the song was too short (it just had one verse and chorus), and it needed a second verse before it could be submitted for consideration on upcoming record sessions. A couple of days later Mercury producer Jerry Kennedy brought Leroy Van Dyke by the Lowery Music office, looking for material for his upcoming first session with the label. When Walker played them the “piece of a song,” both recognized its potential and Kennedy stated, “Bring the song with another verse out to the session Monday morning and we’ll record it.” After the writer was unable to come up with a second verse, Walker volunteered to finish the song but declined to take label credit as a writer.

When Billboard magazine published its 100th anniversary issue in November, 1994, it ranked Van Dyke’s record of Walk On By number one of all time in its popularity charts in terms of position and longevity. Its 37-week run in the country and western charts, including 19 weeks at number one, was tops in records of all categories of music. The Beatles' record, Hey Jude, ranked number two.

In his role as song plugger, Walker often found himself acting as a mentor and sometimes as agent for writers who were also hoping to land recording contracts as well as achieving success with their songs. During the following years when he was affiliated with Lowery Music (and later, with Painted Desert Music and Screen Gems-Columbia), he negotiated record deals for (and assisted in a number of other ways) Alicia Bridges, Bobby Russell, Don Wayne, Buzz Cason and Arthur Alexander and a number of others. Prominent writers who benefited from Walker getting their songs recorded included Wayne Carson Thompson, Martha Sharp, Jerry Reed, Kay Arnold, Dan Penn, Nellie Smith, Ray Stevens, Dan Welch, and Don Woody. Walker also “discovered” Sandy Posey and served as her manager during her mid-60s run on MGM records. He produced or coproduced records by Sonny James, Bill Carlisle, Eddie Rabbit, Bobby Russell, Don Wayne, Lynn Anderson, and Arthur Alexander (recording under the name June Alexander.)

Walker continued to dabble in music publishing after he founded The Great Escape, a record and comic book store with four locations in Tennessee and Kentucky. Now, after selling the business in November 2017, he has reentered the mainstream music industry with renewed energy and excitement. He recently negotiated an agreement with the estate of Hall of Fame writer Don Wayne to act as agent for the unrecorded songs that Wayne left when he passed away in 2011. Best known as writer of Country Bumpkin, the Cal Smith smash, and cowriter with Bill Anderson of Saginaw Michigan that helped revive Lefty Frizzell’s Columbia Records career. Walker’s association with Don Wayne goes back to the 1960s, after the writer left Tree Music and was freelancing: he submitted Wayne’s song, Walk Tall, to Mercury Records for Faron Young, and also produced his Laurie Records single, The Thirteenth Juryman.